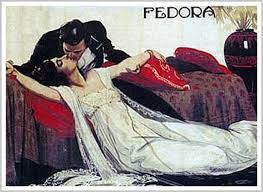 UMBERTO GIORDANO AND HIS FEDORA

Guest post by Basia Jaworski:
Basia con fuoco is Basia Jaworski (Poland/Israel), a freelance publicist and music journalist. For almost 20 years she worked in a specialist store for classical music in Amsterdam, where she also organized concerts, lectures and “autogrammenstunden”. She was also a regular guest on several radio and television programs. including Discotable and Traveler in Music.
WEBSITE

UMBERTO GIORDANO AND HIS FEDORA

How many opera lovers know Umberto Giordano and his operas? Many know Andrea Chénier (for me one of the best and most beautiful operas ever), but that’s it. Unless you are a fan of verism, in which case there is a good chance that you have heard of Fedora. And if you do go to opera houses in countries other than the Netherlands, you may even have seen the opera. Otherwise, you are left with nothing but the CD and DVD recordings.

Admittedly, Fedora does not reach the level of Andrea Chénier, which is mainly due to the libretto. The first act has a hard time getting started and the third is a bit drab. But the music! It’s so unbelievably beautiful!

The play on which Arturo Colautti’s libretto is based comes from the pen of Victorien Sardou and, just like Tosca, it was written for the greatest tragédienne of the time, Sarah Bernardt. The opera therefore offers an amazing opportunity for the best singing actresses. Magda Olivero, for instance, is without doubt one of the greatest performers of the role.

No wonder then that in 1970, when there was serious talk of a comeback for Maria Callas, she was proposed to sing Fedora with Domingo as Loris. Unfortunately, nothing came of it: Callas did want to return, but only as a Norma or a Violetta.

When she was sixty, Mirella Freni included Fedora in her repertoire and she gave a series of performances in Italy and Spain, finally coming to the Met in 1996. It became an enormous success. No wonder, because La Freni’s voice was extraordinary. I have never before seen her act with such intensity; it is a performance of the highest level.

Ainhoa ​​Arteta is truly delightful as the flirtatious, spirited Olga; her performance provides the necessary comic note. As the Polish pianist, Boleslao Lazinski, the real piano virtuoso appears: Jean-Yves Thibaudet. Not only can he play the piano very well, but throughout his performance he convinces as a real primadonna, it is very entertaining to watch.

The staging is conventional, with lavish, larger-than-life sets and real snow behind the stage-sized windows. It’s just beautiful (DG 0732329).
In 2008, DG (4778367) recorded the opera on CD. Alberto Veronesi is a fine, lyrical conductor. He is less dramatic than his colleagues, so that the opera loses something of its ‘verism’.

Domingo is now an aging Loris, but he still sings with passion and in the third act he is simply irresistible. Angela Gheorghiu is a fine, slightly understated, Fedora and Nino Machaidze is a truly fantastic Olga.