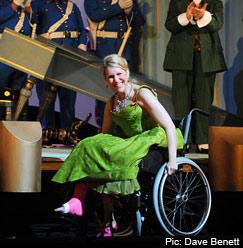 I am sure it happened to you too – something went completely wrong during an opera performance.
I have experienced myself a few incidents and collected others.
Here for you to enjoy:

A glitch in the machinery can be fateful – Mefistofele Theatre Antique Orange 2018
The usually so safe and reliant stage machinery goes totally wrong in this performance of Mefistofele Theatre Antique Orange 2018. Faust and Mefistofele climb into a basket that raises over the stage. But the basket starts to lean to the left. Faust (Jean-François Borras) and Mefistofele (Erwin Schrott) have to move around to keep the balance. Then the basket starts to wobble. The singers hold on best they can trying to keep the balance. The audience is starting to get really worried. After a long time the basket is balanced again and lowered down.
You can watch the whole scene here.

The tale of the missing soprano – Tosca Vienna 2016 Jonas Kaufmann
Jonas Kaufmann sang “e lucevan le stelle” so splendidly that a da capo was demanded. And Jonas sang the aria once more which is very unusual in Vienna as it is against the house rules. After finishing the aria a second time the duet with Tosca Angela Gheorghiu should have begun. But to Jonas and everyone surprise Tosca did not show up on stage. But Jonas started to sing anyway: “non abbiamo il soprano” ( we do not have the soprano). After some pause Angela Gheorghiu finally showed up and the performance continued.
Was it the bis which angered Angela Gheoghiu or ….? Nobody knows….
Watch it here

The case of the disappearing soprano – Ballo in maschera London 1981, Montserrat Caballe and Luciano Pavarotti
This ballo was going to be a highlight of the season. After an auspicious beginning there came one of the highlights- the big duet of Pavarotti and Caballe. But to everyone’s astonishment La Diva walked off scene right in the middle of the duet and left a dumbfunded Luciano alone on stage. The orchestra stopped and the curtain was drawn. Then a speaker announced that madame was not well and she is trying to recover and will try to continue shortly. After a while which seemed like an age Montserrat Caballe appeared again and the duet was resumed where she broke off. Later she sang a glorious “Morro, ma prima in grazia” with her high floating pianissimo. Certainly it was not the voice which was indisposed. After the performance there came rumours that there were other funnies ongoing backstage with Pavarotti being very difficult about something. Never mind it still was a great performance and I was in the audience.

The Heldentenor who could not move and barely sing – Götterdämmerung Vienna 1986 Hans Beirer
At his 75th birthday Hans Beirer was offered a birthday present by the Wiener Staatsoper: an opera performance of his choice. And what did he choose? No, not Salome where Herodes would have been fine – No he had to sing the hero Siegfried in Götterdämmerung. To make things even worse he broke his leg in the days before and was unable to walk. It was a curious performance I attended: A 75 year old Siegfried who could not move at all and barely sing – it was awesome to watch and listen to. I hope he was happy with his birthday present. Otherwise the performance had some great singers: Gwyneth Jones, Walter Berry, Christa Ludwig …

The handicapped Rosina in the wheelchair – Il Barbiere di Sivigla London 2009 Joyce DiDonato
Quote from The Telegraph:
She did so days after breaking her leg during the premier of a five-performance run at the venue in Covent Garden in central London.
DiDonato, 39, thought she had just twisted her ankle when she slipped on stage while playing the female lead role of Rosina during the 100-minute first act of Rossini’s opera on Saturday evening.
She gamely carried on until the interval with nothing more than a stick to support her.
Returning on stage with a crutch, she was applauded when she sang the line – with added comic effect – “I’ve a cramp in my foot”.
After the curtain fell – to a standing ovation – she was taken to hospital where doctors discovered she had actually fractured her right fibula, the thinner of the two lower leg bones.

An unforgettable night at the opera 07 Jul 2009
Joyce DiDonato breaks leg during Barber of Seville opera 07 Jul 2009
They wrapped her leg in plaster and told her to take it easy, warning her not to put any weight on it.
Before the second performance, on Tuesday night, all talk was of whether she would perform.
But DiDonato, who is world renowned for her performances in operas by Rossini, Handel and Mozart, made good her pledge that the show must go on.
Between performances she had written on her blog that she planned to sing from a wheelchair, promising to give it “everything I have”.
She also joked: “From here on out, I declare that no one (please!) ever ever ever wish me again, in the American fashion (despite it being Independence Day), to: ‘BREAK A LEG’.”
A source at the Royal Opera House said Tuesday’s production had been re-choreographed “very carefully” so that the other singers, who included Juan Diego Flórez, the Peruvian tenor, did not have to relearn their positions.
Watch it here

Have you experienced an operatic mishap or funny incident?
Please let me and our readers know.
Please add it in a comment below (you have to be logged-in)