Home..BlogOperas with a special place in my heart

Operas with a special place in my heart

Sure I love all opera and I love some more than others but there are a few operas which occupy a very special place in my heart.
Well, you say how can one choose between great masterworks and prefer one over the other? Is La Traviata better than La Boheme? Do you prefer Otello over Falstaff? Is Der Rosenkavalier a greater work than Salome? These comparisons are futile. It is always a matter of personal taste and preferences and very different for different people.

Why these operas hold a special place is very personal. These operas bowl me over each time I see them. The reasons are very personal emotions. Other people have such operas too but they are different because of different personal emotions.  What is common to these operas? First there may be a special personal experience connected to it. What all have is what I call magic moments: These are moments in the opera which could be a spot in the libretto, a great melody or a chorus.. But although I know these magic spots so well each time I experience one it sends warm shivers through my body. Have you experienced this?

Here are my operas with a special place in my heart (in historical order without any preference):

This opera has an almost perfect plot and libretto and it is about very real people. I think it is so great because it was the first Mozart/Daponte cooperation and you can feel how much fun those guys had in creating it. And it is based on a very successful play.
I virtually grew up in Vienna with Figaro and that formed a livelong relationship. The arias and ensembles are so great that not only Vienna sang and played them but it was the popular music of the time in the whole of Europe.

Now about the magic moments: two of them are really silence: that is when the Count discovers Cherubino in the chair and the second when the Count finds Susanna instead of Cherubino in his wife’s closet. The greatest magic is right at the end with the Countess entrance and the Counts “Contessa perdono”.

As you know the original Ballo told the story of the murder of king Gustav III at the Stockholm opera. And with Stockholm and the Royal Opera I have a very personal special relationship.
I have seen Ballo more often than any other Verdi opera (including La Traviata) and it is one of the two operas which I have experienced with all of the three tenors. The other one is Tosca.
The magic starts in the overture when the melody is interrupted by the conspirators theme. The next magic occurs with Riccardo’s La rivedrà nell’estasi. È scherzo od è follia is true magic especially when Pavarotti sang it. And the second act aria and duet are truly great.

Meistersinger? and not Tristan some will say. True also Tristan has magic moments but also very lengthy passages. Meistersinger has a special place with me and even though it runs for four and a half hours I never find it boring. Like Figaro it has a great plot and real people with real emotions. And it has a certain subtlety which otherwise is not very present in Wagner’s operas. Although I have seen Meistersinger many, many times I am still waiting for the perfect performance.
Magic starts with the overture which always bowls me over. The next magic moment comes with Am stillen Herd. Magic continues with Dem Vogel, der heut sang  in the Flieder-Monolog and Mein Freund, in holder Jugendzeit. The glorious conclusion comes in the third act with the Prize Song in all it’s permutations from the Schusterstube to the Festwiese.

Pagliacci is Verismo at it’s greatest. What a story, such emotions, love, adultery and murder mixed with commedia dell’arte. And glorious music.
I have seen it with Domingo in Vienna and I will never forget.
Magic starts in the prologue with Un nido di memorie. The duet Nedda/Silvio is magic for me. As fine as Vesti la giubba is, for me No! Pagliaccio non son! is the real magic.

Turandot is a perfect fairy tale. It is a pity that Puccini did not finish it himself.
The magic starts with the moonlight chorus. The riddle scene is great but my magic always occurs before. The march which connects the scene of the the three masks to the chorus is magic for me. It starts pianissimo almost in the background and rises gradually to a resounding fortissimo. I saw Lorin Maazel’s last performance as director of Wiener Staatsoper (Marton was Turandot) in 1984. The Vienna Philharmonic played this superbly. Unforgettable.
And last but not least Nessun dorma can provide great magic if sung by a great tenor. With lesser tenors it can be annoying.

Again some of you will lift their eyebrows and say Arabella, why not Der Rosenkavalier. Yes, Rosenkavalier is a truly great opera but it took me many performances and quite some time before I started to appreciate it fully. On the other hand my first Arabella ever (Vienna with Lisa della Casa, Rothenberger and Wächter) just bowled me over. I have seen many Arabellas after but no one came near Lisa della Casa. The other best ones were Renee Fleming and Kiri Te Kanawa.
Not surprisingly the magic starts with Aber der Richtige and the following duet. In the second act magic continues with Ich habe eine Frau gehabt and Und du wirst mein Gebieter sein. And it reaches a glorious conclusion in the final Arabella/Mandryka. 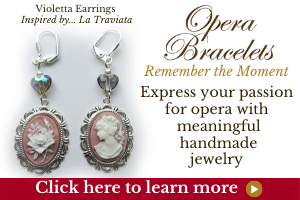